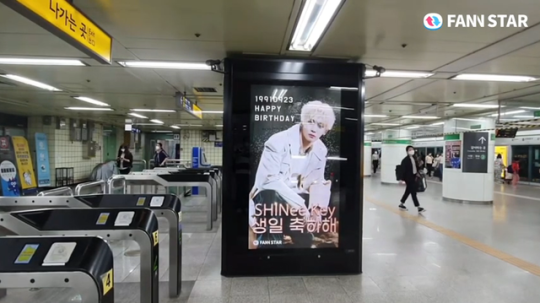 Kpop group SHINee member Key is celebrating his birthday!SHINee Key received an unforgettable gift from fans for his birthday.‘Fan N Star’ released a photo of KEY’s birthday celebration event advertised on the CM Board of Konkuk Universtiy Station, Gwangjin-gu, Seoul, Korea on September 23rd. His fans achieved the Fan N Star ‘Board Advertisement,’ which opened on August 6th. Advertisements run through the CM board of Hapjeong Station, Mapo-gu, Seoul, and Konkuk University Station, Gwangjin-gu, Seoul from September 20th to 26th.Key’s support was successful, and the message of support from fans poured into ‘Fan N Star’.’

Fans commented, “happy birthday” and “I’ll be a strong support.”In ‘Fan N Star,’ fans can open their own billboard support for artists of their choice. If you can make a billboard video yourself, you can apply for ‘Special Ads’ or ‘Global Ads’ if otherwise.